From Support
← Summary:Support/How to replace wrongly translated spelling of a word appearing in language list
Jump to navigation Jump to search

Please summarize the below thread in the editing box. You may use any wikitext in your summary. When you finish, click "Publish changes".

You do not have permission to edit this page, for the following reason:

The action you have requested is limited to users in the group: Users.

You can view and copy the source of this page.

Templates used on this page:

Return to Summary:Support/How to replace wrongly translated spelling of a word appearing in language list.

Thread summary:[Link to] [Edit]
OPEN This issue is open, waiting for action by Nemo_bis

It is observed that Angika translation of Angika (Code - anp) is being shown in the language list as अङ्गिका . The same should be written as अंगिका .

I am not getting the right link as to where the spelling can be corrected.

Show me the method to replace wrongly translated spelling of a word appearing in language list. Else change the same from अङ्गिका to अंगिका .

Have you already searched the word in Special:SearchTranslations?

Yes, I have searched the word, अङ्गिका and the same was not found in search results.

You may be interested in viewing the previous activities for the same issue;

Can you specify which language list are you talking about?

Everywhere in Default Language Lists of Suggested Languages on Translatewiki.net, MediaWiki, Wikipedia Incubator and all other sister projects of Angika (anp) in Incubator. 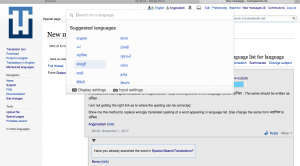 As FAQ#Language_names stated, this should be fixed at CLDR.