Fragment of a discussion from Support
Jump to navigation Jump to search
Music writer Dr.Intobesa of Japanese idol NMB48 and BNK48. (talk)‎15:54, 15 November 2021

The misspelled word "ကညီစှီၤကျိ" is probably a copy-paste problem.

Evidence for "ပှဖျိၩ့ၡိ" would be very useful. Thanks. 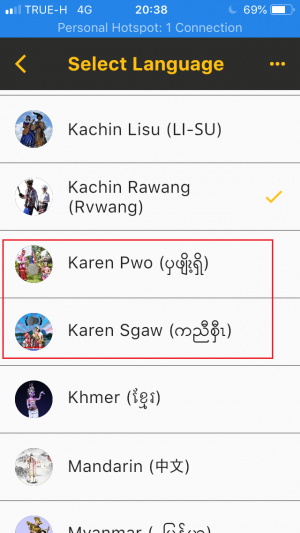 Evidence is as follows:

OK, thanks. Another question: In the language settings of the Windows 10 operating system, I see that Western Pwo is called "ဖျိၩ့" and S'gaw Karen is called "စှီၤ". Are these names incorrect?

I do not speak Karen. But I can do is consultation with native Karen people, and the name I provided "စှီၤ" is chosen by them via Karen Translators Network.