From Support
← Summary:Support/Translate bug: Misidentifies which version of /en message is the latest
Jump to navigation Jump to search

Please summarize the below thread in the editing box. You may use any wikitext in your summary. When you finish, click "Publish changes".

You do not have permission to edit this page, for the following reason:

The action you have requested is limited to users in the group: Users.

You can view and copy the source of this page.

Templates used on this page:

Return to Summary:Support/Translate bug: Misidentifies which version of /en message is the latest.

Thread summary:[Link to] [Edit]
CLOSED This issue is closed by Raymond

The translation interface is misidentifying which version of an /en message is the latest.

The original message MediaWiki:Interfaceadmin-info/en was changed, as follows:

The change was presented by the translation interface, and the /pt translation was updated accordingly, as follows: 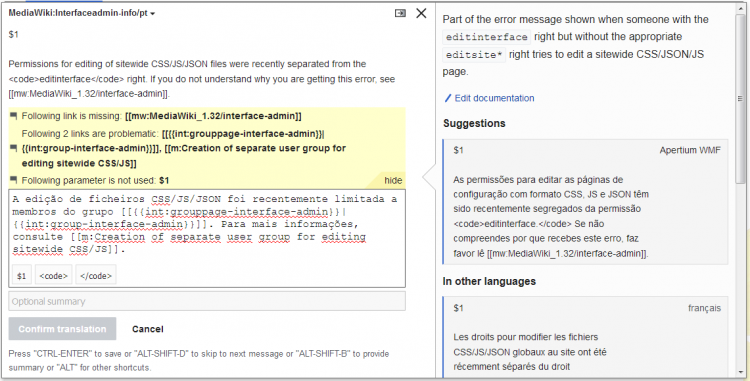 I have purged the translation statistics page, and the problem continues.

Do you want to verify first if this is due to something local, or should it be reported in Phabricator?

Here's something even funnier about this.

This single message is listed as belonging to two groups: "MediaWiki core" and the extension "Wikimedia Overrides":

It's the same message being listed in both groups.

That in itself is probably incorrect, right? No message can belong to core and to an extension, I believe.

But, the three errors reported are the same as previously: those that result from a comparison with the old /en message instead of the new /en message that is being presented.

The other one is now prefixed with 'wmf-' and this should be resolved.

Can you please re-check? The situation as I see it is still exactly as reported.

There are indeed three messages starting with 'wmf-' in three languages but none of them is English.

Sorry I was too hasty. It should really be fixed now.

Sorry to report that the situation we have now is:

1. Umm, that should fix itself if they are updated (e.g. fuzzy and unfuzzy) 2. We don't really bother deleting unused messages unless they are in the way 3. Ok.

Just to make sure we are in synch, please confirm that you are aware that all existing translations of MediaWiki:Interfaceadmin-info/en are incorrect.

I fuzzied them all. I don't know what else I could do.

Maybe some random edit of MediaWiki:Interfaceadmin-info/en followed by its undo, could force Translate to present the latest revision for translation?

Could you please remove "!!FUZZY!!" from MediaWiki:Interfaceadmin-info/en and save?

Maybe this edit will finally cause the software to identify correctly the version of this message that should be translated.