From translatewiki.net
(Redirected from Blockly)
Jump to navigation Jump to search

Internationalization, being gender-neutral, and being accessible in a variety of cultures are key priorities.

Our target audience is individual or small groups of children. Please use gender-neutral forms if possible in your language.

The tone is informal and conversational, and we prefer short phrases to long ones, such as "if path ahead" instead of "if there is a path ahead". Translations need not be exact.

It is more important that language be clear to beginners than that it matches what experienced programmers use. For example, we use the term "text" instead of "string", and we use "list" instead of "array". A more technical example is that we use 1-based indexing instead of the more common 0-based indexing.

Consistency is important. In English, for example, we have gone back and forth on whether to use the term "function" or "procedure". What is more important than which term is chosen is that the same term is used throughout. See Blockly Terms for how key Blockly terms appearing in multiple messages have been translated (if at all) into your language. If agreement among translators cannot be reached, please ask for help.

If any mathematical (or other) symbols are inappropriate in your language but are not offered for customization, please let us know.

Blockly
Our recommendation is that the name of the project be left as is in languages using the Latin alphabet and that it be transliterated in other languages, possibly in parentheses, such as "Blockly (Блoкли)" in Russian.

block
Blocks in Blockly programs should be translated as children's building blocks. If that doesn't work in your language, "puzzle piece" is also acceptable.

Plural formatting is not supported.

Some blocks refer to the nth item in a list or piece of text, where n is an arbitrary number or expression. In English, such a number is preceded by "#", which is included in the messages that precede the space in which the number would go:

Hungarian requires that such numbers or expressions be followed by a dot ("."). A special message ORDINAL_NUMBER_SUFFIX has the value "." for Hungarian and is automatically placed after each ordinal number (but not after the words for "first" or "last", which are already ordinal).

The Hungarian block above also includes a "tail" (final piece of text after the last block). Most languages do not require support for ordinal numbers or for tails, in which case those messages should be the empty string.

All of the tutorials and applications use a subset or all of the Blockly language, which consists of blocks representing aspects of programming languages, such as control structure, creation of variables and procedures, and library routines. You can play with the blocks at https://blockly-demo.appspot.com/static/demos/code/index.html

The toolbox, workspace, and categories

The below picture shows: 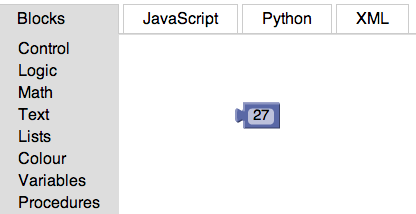 In the above picture, the toolbox is closed, and only category names (such as "Control" and "Logic") can be seen. One block is in the workspace. In the below picture, the user has clicked on "Control", causing the category to be expanded and the blocks shown. This screen also has tabs to show the JavaScript, Python, and XML associated with the program in the workspace. Currently, the "Blocks" tab is selected.

There are many different types of messages associated with blocks, illustrated in the pictures below:

Note that the block below is highlighted (surrounded by a thin orange outline), indicating that the user has selected it. Clicking on any of the context menu items affects the highlighted block. Some items, such as "Duplicate", "Disable", and "Delete" also affect any contained blocks (such as the number 20 in this example). 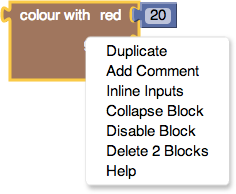 Selecting Inline Inputs transforms the block to the following form:

Restoring the default display is done through the context menu item External Inputs (not shown).

There are additional types of messages associated with a few blocks: 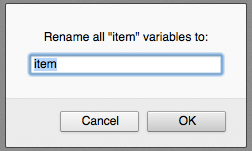 A few blocks can be reconfigured. For example, an "if" block can be reconfigured to have any number of "else if" sections. The user makes such modifications by clicking on the star (formerly a "+" sign) in the upper left corner of the block, which opens a configuration tool, shown below: 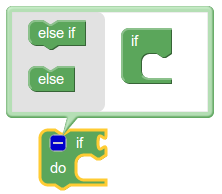 Any number of "else if" blocks, and up to one "else" block, may be added to the "if" block.

Similarly, any number of inputs (also known as "parameters") can be added to function definitions: 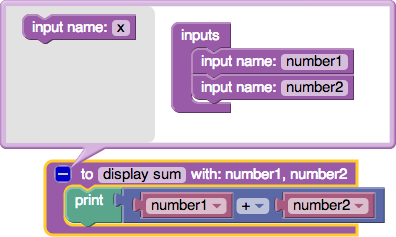 This is an advanced feature, and it is not necessary to understand it in order to do translations.

Each game has its own messages. There are also messages of the following types that are used by multiple applications:

The introductory puzzle teaches people how to use the blocks. It is the easiest to translate, as it contains no technical terms.

The maze game has the user guide a character to a goal. It is the most popular Blockly game. 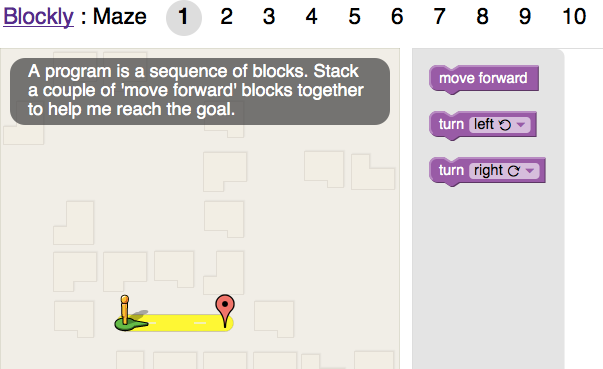 level
Tutorials are divided into numbered levels, like the levels in a video game. The first level of each tutorial is 1. Harder levels have higher numbers.
player
Term for the character moved by the user's commands. This was originally "Pegman", but we added skins to change the character's appearance. We chose the English-language term "player" over "character" or "avatar", because "player" is simpler and shorter.

Related instructions (such as "turn left" and "turn right") are represented by a single block that contains a drop-down menu as shown in the image below. The translator does not need to do anything special for words (such as "turn") to be pulled out of drop-down menus; common left or right substrings delimited with spaces are automatically recognized and extracted.

In some languages, such as Vietnamese, it would not be appropriate to extract common substrings. If the translator set Maze.turnLeft to "quay qua trái" and Maze.turnRight to "quay qua phải", this dropdown menu would be created, which would look wrong to a Vietnamese speaker:

In languages without spaces between words, such as Chinese, the translator should insert a space where a break should occur. For more detail, see the Blockly documentation on drop-down menus.

The Turtle game enables users to draw pictures through the use of "turtle graphics", which originated with the Logo programming language. With turtle graphics, the user directs an imaginary turtle (represented as a green circle) to move, turn, change its pen width, etc., in order to draw a picture. As with all of our applications, translators are encouraged to try it out.

See discussion above about dropdown menus.

Languages with translation completion less than 25 % are not committed to version control. If the project consists of multiple message groups, the limit is applied to each group separately.

Translation updates are exported to version control every Monday and Thursday.

The numbers shown below are cached and may not show the latest status. See this stats page for always up to date statistics.

Add yourself to map