Hi Tagir. Welcome to Betawiki. Before you can use Special:Translate, please request translator rights at Betawiki:Translators. Please create a user page on which you describe which language(s) you will be working on.

Once you have started translating, please remember to often request a commit of your translation work at Translating:Tasks. This makes the number of changes easier to handle for the devs.

Hi would you please translate the article for my home town into your language for me, I would really appreciate it. I have spent a lot of time working on the article and I even translated it into Spanish and Chinese myself. Would you please translate this short summary of the article into your version of wikipedia? Or maybe just a few sentences you come up with on your own? I would help with anything you need in English or Spanish in return. Thank you. If you do translate it, please let me know so I can add the inter-language link to your language.=)ᐃᓄᐃᓕᕿᔪᖅinuiliqijuq 06:15, 27 October 2007 (UTC) 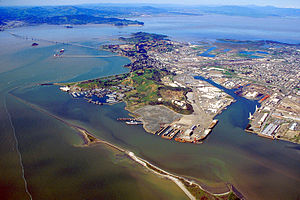 Western Richmond from an airplane

Richmond (IPA: /ˈrɪtʃmənd/) is a city in western Contra Costa County, California, United States incorporated on August 7, 1905. It is located in the San Francisco Bay Area, it is 29 kilometers from San Francisco. It is a suburban and industrial port city. Richmond was farmland during the early 20th Century but the population exploded during World War II with workers migrating to the city's shipbuilding yards. The city's mayor is Green Party-member Gayle McLaughlin. As of the July 1, 2005 U.S. Census estimate, the city has a population of 102,186, while the California Department of Finance estimates the city's population at 103,468, as of January 1, 2006. The city has thousands of acres of parks, high crime in the downtown areas, a very diverse population, warm weather, high freeway traffic, leftist politics, working class residents, a combined Bay Area Rapid Transit metro and Amtrak railway station, Alameda-Contra Costa Transit District buses, and two newspapers the Richmond Post and Richmond Globe. The people are 21% white, 36% black, 1% indigenous, 13% asian, 14% other, 5% mixed. 26% of those people were also Hispanic. The average age is 33. 75% finished high school, 22% have a bachelors degree, 8% had a doctorate. 7% are unemployed. 7% are military veterans. The average household makes 55,000 dollars a year, the average person makes 22,000 dollars a year, the average house costs 449,000 dollars. The languages spoken are 64% English, 23% Spanish, 1%: Chinese, Hmong, Laotian, Punjabi, ½%: Cantonese, French, Vietnamese, and 3% other.

Hi! Yes, sure! The only moment, I am a bit busy with translating the obligatory part of system messages to create the Ingush wiki. So it can be delaied a bit, but eirlier or later I for sure will do it. I hope it is not too urgent? Cheers, --Tagir 14:25, 27 Oct 2007 (CET).

There are no threads on this page yet.
Retrieved from "https://translatewiki.net/w/i.php?title=User_talk:Tagir&oldid=239427"