From Translation UX feedback
Jump to navigation Jump to search

Thread summary:[Link to] [Edit]
OPEN This issue is open, waiting for action 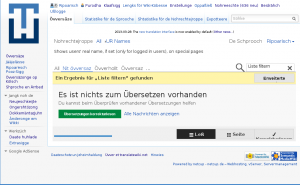 Screenshot of new translation page as of today with contradictive messages.

We are shown "one result found after filtering" (in the yellow box) even if there are no results, as the new translation page shows just below that yellow box: "There is nothing to be translated", see attached screenshot,

It works for me in Dutch and English. I'll look into the "ksh" translation potentially being faulty, or otherwise the plural handling in JavaScript.

The problem is indeed in the translation:

Reason for this is the order of the definitions for plural forms in languages/data/plurals.xml:

In MediaWiki, the order of parameters of PLURAL for ksh is:

Conclusion: I suggest to alter languages/data/plurals.xml - would the following be correct? There is some guesswork in it from my side:

The above quoted data is from CLDR. We will not override it.

Does that mean, I should change it at CLDR? That is of course possible, but will take ages until we have it here. When I submitted ksh plural definitons to CLDR, they did not have any documentation or hints on the fact that the order of cases was relevant, or even useable/used elsewhere.

As far as I know, the feature that values can be left out from the right, which TWN even enforces since not too long, is not part of the plural handling of CLDR, or at least was not, when the ksh plural rules were submitted.

Other translation platforms using the CLDR plural definitions, let translators choose the order in which they specify cases.

Does the JavaScript implementation of PLURAL support the keyword version of parameters? If so, using keywords might be a good temporary fix until a general solution is found and working,

Using a different order for plural forms than CLDR is not an option here. We are trying to make our plural rule support more and more standard compliant. I understand that there can be messages where zero form is written at the end of all forms like

As per MW implementation of CLDR rules, this must be

Also, instead of random order of plural forms, it is logical to use plural forms in the increasing order of $n

In addition to the above syntax, it is always possible to explicit rules like

Having said that, this change has implication on the existing messages of ksh using the zero form at the end. We probably need to mark those messages fuzzy.

I gave the version with explicit numbers a series of tries. It is not working.

Having incompatible PLURAL syntax inside the MediaWiki: namespace for different messages or message groups is imho not acceptable, and too error prone anyways.

There's a single PLURAL syntax for MediaWiki, however there are different plural rules. This is the problem because rules are fixing the number and order of items in the MediaWiki PLURAL syntax

The good thing to do for MediaWiki would be for PLURAL to NOT require the implicit' numbering for items, but allow them to be explicitly given by a "|selector=text" parameter instead of just "|text"; i.e. the Mediawiki PLURAL syntax for its parameters should work exactly like template parameters (that also have implicit numbered names for unnamed parameters)

So for Ripuarian/Kölsch the translation above should be (or should become) any one of:

And if there are any ambiguity for translators, they can (and should) use explictly named parameters (the 1st form above is preserved for compatiblity, but not recommended as it implies that translators are aware of which CLDR ules are used, and about their order of definition). Only the LAST unnamed parameter (given without an explicit selector) can have its implicit name "many=" omitted (including in the last two examples just above).

This thread is created nearly 4 years ago, and is this issue fixed in the past years? If not, would asking at Phabricator be a good idea?